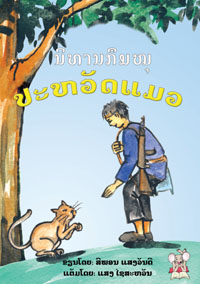 The Story of a Cat

Once upon a time, a cat decided to ally itself with the strongest animal in the forest. So the cat found a fox, and was content until a more powerful animal appeared: A lion. The cat switched to the lion but then an elephant appeared... and then a human hunter. At the end of the story, the cat is curled up comfortably next to the hunter's wife.

This is a traditional Khmu story, one of many that was gathered by Siphone, who is Khmu and collected stories from his older neighbors and relatives.