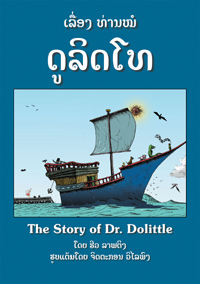 The Story of Dr. Dolittle

Dr. Dolittle becomes the most sought-after animal doctor in England after he learns animal language. When he sails to Africa to cure an epidemic that is killing the monkeys, he must confront one dilemma after another.

For nearly a century, this story of a kind-hearted animal doctor, who fearlessly confronts both haughty lions and greedy pirates, has entertained readers of all ages. This edition has a simplified English text, side by side with Lao. It will be especially popular with Lao college students practicing their English.