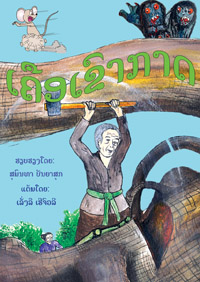 In the beginning, the earth was covered with water. God created land, and sent his son Khun Bulom to earth, and they created humans. But a giant vine covered the earth, and blotted out the sun. The vine had to be killed, but whoever killed it, would die in the undertaking.

An elderly couple, Pu Nyoe and Ya Nyoe, decided to sacrifice themselves. They cut the vine, although it cost them their lives. Now, during the Lao New Year celebration every April, people carry masks with long stringy hair, honoring these two legendary figures.