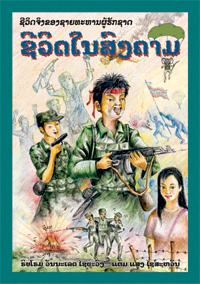 Life in the War

Thongphet grew up in a Lao family struggling for survival amidst the nightmares of war. Like most rural boys, he took care of the family's water buffalo, and developed an affectionate relationship with the gentle animal.

One day French soldiers came to the family's home and killed the buffalo. Soon after that, Thongphet joined the Lao liberation army. He fought in the long war that eventually ended the terrors of French colonial rule and American bombing raids, though not until he had lost a leg from one of those bombs.

With help from Vannalet, Thongphet recounts his memories of the war years, from searching for water in dead trees during dry season, to being carried on a stretcher to a hospital in Vietnam, after losing his leg.