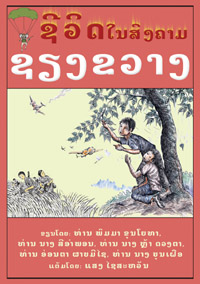 Life in the War in Xieng Khuang

Pomma was a teenager in Xieng Kwang province during the war years of the 1960s and 1970s. He and his friends joined the army and lived in what remained of the forest, after heavy American bombing.

They dug wild taro for food and dug a trench where they slept. After bombers passed over, land troops came through and killed anyone who was left. One day Pomma left the trench to collect water; when he returned, two friends were dead.

Another young man, Onta, was cutting thatch for his house when a U.S. warplane began dropping bombs.

In this book Pomma, Onta, and three others tell their stories, preserving a part of Lao history.