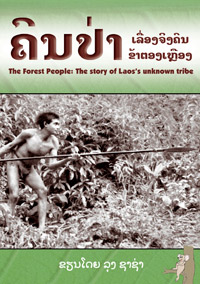 People of the Forest

Who has ever seen the forest people? Among those of us living in Laos today, few have met the shy people of the forest, living a simple way of life in temporary shelters, with spoken language and simple musical instruments but no agriculture or written language.

Some of our grandparents saw them, and often referred to them as "Spirits of the Yellow Leaves" because the forest people themselves were rarely seen, only the yellow leaves of their abandoned shelters. They are also called the Mlabri, Mrabri, or Yumbri.

There were never large numbers of Mlabri, but there were more in the past than today, living in parts of Laos and northern Thailand. Gradually they've been assimilated into villages and perhaps none even remain today; no one is sure. Here, based largely on the work on an Austrian anthropologist in 1937 and a few more recent works, is the story of this tribe.