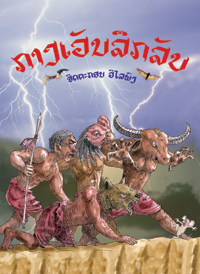 A Fantastic and Frightening Place

When Siang's little sister is late for lunch, he does what most hungry 8-year-old boys would do: He eats his own lunch, then he eats hers.

Scolded by his mother, he marches out of the house, through the town, and ends up at the old temple. The graphic temple paintings of Buddhist hell soon mingle with his own inner turmoils, and he is transported to a faraway world of demons and monsters.

Inspired by Maurice Sendak's book "Where the Wild Things Are," Chittakone has drawn and illustrated an entirely Lao story of a boy who visits a world that only he will ever know... and, we're happy to say, still returns to a loving home and a warm dinner.

Chittakone has illustrated several of our books, including "New Improved Buffalo" and "Doctor Dolittle". He began working on this book when he was 16, and spent two years on the artwork. We believe it will become a Lao classic.