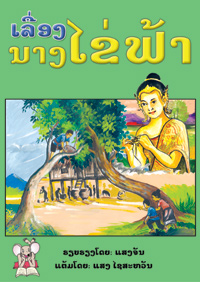 This traditional Lao folktale tells of a poor orphan who lives with his grandmother. He doesn't have a fishing net, so the grandmother makes one from her hair. The next day he finds it filled with an enormous egg.

The egg was sent by a god; it contains the god's daughter, Nang Kaifa, and her servants. They marry, but before they can live happily ever after the orphan must win a contest against a greedy king who has set his sights on Nang Kaifa.