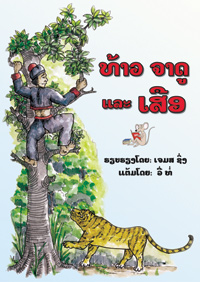 Jadu and the Tiger

Jadu loves to play tricks on his friends - so much that soon he doesn't have any more friends. And he's lazy - so lazy that he sits and watches his mother as she works in the field.

Finally, his exasperated mother calls a tiger out of the forest, and tells the animal to eat the worthless Jadu. But the cunning Jadu finds a way out of his fix.

James, whose English-language book "Growing Up On The Mountain" tells about a Hmong boyhood, retells this popular Hmong fairy tale. Vue, a young Hmong artist, drew the lively illustrations.